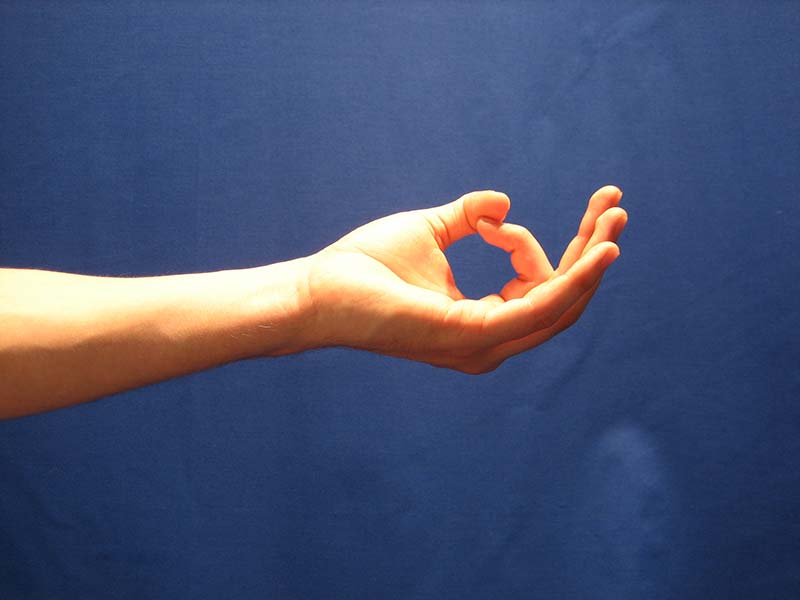 The Power and Science of Mudra

“Science: The investigation of natural phenomena through observation, theoretical explanation, and experimentation, or the knowledge produced by such investigation.”  -American Heritage

In September of 2014 my wife and I toured the Asian Hall at the British Museum in London. The presence of nearly every statue exhibiting at least one mudra confirmed my suspicion:

We in the West have overlooked a powerful technology of yoga.

It was no accident that the hall was filled with silent demonstrations of what I predict will become part of the next wave in smart, safe yoga.

Mudras are purposeful body positions, most often involving the hands, but not exclusively. The positions are said to offer the practitioner insight, powerful healing, and other mind-stuff stabilizing capacities. The current modern postural yoga has largely skipped over these techniques in favor of the more culturally familiar “exercises” of asana with their exterior, visible emphasis. The subtlety and interior perspective of mudra has been relegated to that of an occasional meditation prop at best in most brands of yoga.

Two recent books have been published that I hope will further the exploration and adoption of the science of mudra. The books are Mudras for Healing and Transformation by Lilian and Joseph LePage, and Mudras: The Sacred Secret by Indu Arora. The knowledge that will be produced by such investigation invites further scrutiny from the yoga and health care communities through the lens of the scientific method in search for theoretical explanations of how mudras “work.” This post is intended to ignite a conversation, while suggesting both explanations and directions for the further incorporation of mudra as smart, safe yoga.

What is Published About Mudras?

A review of the literature in April 2014 found no published peer-reviewed studies that looked specifically at mudra as a phenomena or a treatment variable. There are a few Kundalini studies that utilized movements, mantra and mudra in combination but the practice was not isolated to mudra and no specific discussion of the theoretical explanation of mudra was published. A review of the few available books on mudra found that beyond the relaxation response and elemental model descriptions of possible explanations, there was no discussion reflecting emerging neuroscience and the complexities of human movement and behavior.

The latest science findings reveal a level of complexity and integration of function and form that leaves behind old perspectives such as:

The revelations of epigenetics, neuroplasticity and interpersonal mind that were mere speculation at the turn of this century are now accepted facts. The reductionist process of science has revealed an integrative reality suggesting many possible explanations for the role of mudra. The scope of this post is constrained to a laundry list of ideas intended to spur further questions.

The Potential at Our Fingertips

This is just a small list of possibilities to invite the reader to a deeper consideration of “How mudras work.” When matched with advancing technologies of measurement (fMRI, PET scans, body image scaling, surface emg’s, etc.), more robust research methodologies (quantitative, qualitative and mixed methods), data management and statistics through software, transcription and thematic extraction, as well as new electronic publishing capacity to allow for cost-effective publication of these findings the possibilities for study are breathtaking.  From simple case reports to complex high-tech investigations, mudras invite us to explore the beauty of their design within the complex fabric of the human experience.

Readers are invited to contact me for more information or discussion.

Not sure mudras really “do” anything? That’s ok. Try this simple experiment on yourself:

Put your hands on your lap in hakini mudra as shown here. Close your eyes, sense the size, location and movement of your normal resting breath. After a half dozen, then separate your thumbs, keeping all of the other digits in contact with their opposite digit. Sense and observe any change in size, location or movement of sensation related with breathing for 6 breaths. Then reconnect thumbs and repeat with separating the index fingers for six breaths, then middle finger, etc. Finish after the small fingers by re-sensing with all the fingers in contact. Then try playing with one breath at various levels noting any changes you experience.